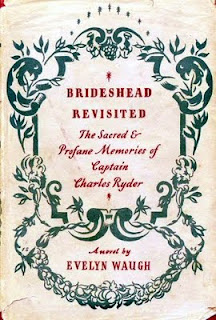 There's a scene about half-way through Evelyn Waugh's Brideshead Revisted, in which the hero, Charles Ryder, eats dinner in a Parisian restuarant with the appalling Rex Mottram, a Canadian go-getter whose stupendous worldliness and material omincompetence are only matched by the catastrophic void which is his interior life. Compared to a 'semi-imbecile' by a Catholic clergyman later in the book, Rex is cultureless, soulless and (except when it comes to really big things, like money and a trophy wife) quite without discrimination.
So Ryder (a fastidious, talented, graceful snob, Waugh's fond re-imagining of himself) goes to town. He chooses the restaurant - unshowy but exquisite - orders the food and the drink. The period is some time in the late Twenties/early Thirties: so he calls up a bottle of 1906 Montrachet and a Clos de Bèze 1904. Mottram grumbles away about the aristocratic Marchmain family he's about to marry into, while reckoning that all Ryder's favourite eaterie needs is someone spunky to take an interest and 'Make something of it.'
Ryder dials out and loses himself in his Burgundy, which 'Seemed,' as he says to himself, 'a reminder that the world was an older and better place than Rex knew, that mankind in its long passion had learned another wisdom than his.'


Well, I don't know about you, but it's somewhere about here that I dial out of Brideshead Revisted : the queasy-making point where wine connoisseurship meets five-star sanctimony.
Brideshead Revisited, as most readers now know, is a Great Bad Book - easily Waugh's greatest commercial success, a huge hit in the United States, and yet so bad that even he disowned it fifteen years after it first came out. Sentimental, overblown and written at a time when most British people, Waugh included, were half-starving, 'The book is infused with a kind of gluttony' - Waugh's words - 'for food and wine, for the splendours of the recent past, and for rhetorical and ornamental language, which now with a full stomach I find distasteful.'
On the upside, there is a good deal in it about booze.
Charles Ryder first gets to know the Hon. Sebastian Flyte and Brideshead, the ancestral palace which is his family home, over a picnic whose principal liquid refreshment is a bottle of Chateau Peyraguey - 'Which isn't a wine you've ever tasted,' as Flyte puts it, 'so don't pretend.' Later on, and rather sweetly, Flyte and Ryder explore the contents of the house's great cellars. They have a book of tasting notes; they forgot who's drunk what; they get their glasses muddled up; they get shitfaced. Ryder comes out of it with an appreciation of fine wines, which he then inflicts on Rex Mottram. Sebastian Flyte winds up an alcoholic.
But the alcoholism comes in handy. The other thing everyone knows about Brideshead is that it is a three-hundred-page hymn to Roman Catholicism. Just about everyone in it starts out or ends up as a Catholic, even the sceptical Ryder, seeking comfort at the end in 'An ancient, newly-learned form of words.' Sebastian Flyte, scion of a great recusant family, spends most of his time in the novel failing to live up to the tenets of the Church, before, in the final quarter, turning into a kind of holy pauper or fool - the logical last term of his drink addiction. The booze (and it's not just wine by now, but just about anything he get his hands on) is his particular path to the sacraments, as it strips away his vanity, his sense of self, his anxiety about the world's (or at least his family's) opinion.
In other words, wine is a key expression of the three main themes of the novel: high culture; the Arcadian dream; redemption.


Which makes it slightly weird that the normally astute Martin Amis, in his critique of Brideshead, picks on Ryder's 'Reminder that the world was an older and better place than Rex knew' in order to give it a kicking: 'Ryder must be a simple soul, by God, to be so elaborately solaced by a glass of wine.' Hard to believe that Amis simply missed the point; more likely he just wanted to trash Waugh's reputation, whatever the circumstances - and (by God) Ryder does come across as the most inordinate ponce, much of the time.